We’ve been carefully studying the effect different post types have for publishers, and the following trend is clear: video wins.

When Facebook launched native video, the top engaging Facebook posts in the world were all FB native video. When Live Video launched, we saw this format punching way above its weight in terms of engagement per post worldwide. The publishers that have been able to react the fastest and go all in on FB’s own formats have seen tremendous success. This Spanish example shows just how much FB Live video posts outperform other post types.

Live video on FB over-performs. More engagement means more reach, more people seeing your posts and eventually more clicks to your sites. Previously, there were two types of publishers that best managed to corral this up to grab engagement:

1. News publishers with the resources to experiment with video
2. Viral publishers

And now we welcome a third – the Politician. In the case of the 2016 US Presidential Election we see the lines blur as the idea of Politician fades away and instead we have Candidates as Celebrities. With such a significant amount of people getting their news from Facebook, it would be folly to underestimate the importance of winning the battle on Facebook. Here is one area where without a doubt, Donald Trump’s campaign has utterly trounced Hillary Clinton’s.

Let’s look at the numbers – here we can see weekly engagement scores for total FB engagement across all posts (likes, reactions, comments and shares) from the Facebook pages of the two candidates:

As you can see, Trump is the clear winner in terms of engagement muscle. The only time Clinton managed to overtake Trump coincided with the second Presidential debate, the most popular post being simply a photo of Clinton, memefied with the “I’m with her” caption. It’s true that Trump has a significantly larger Facebook page – 11.8m vs Clinton’s 7.7m page likes – although we know this doesn’t necessarily mean anything.

Focusing on October 2016 and the run up to to the November election, we can see how Trump dominates using both types of video available on Facebook. Firstly, native video:

Clinton does manage to make it a close race in the second half of October – and that’s when we can look towards FB Live video:

Looking at the quantity of output over October, Trump has streamed 33 live FB broadcasts on 12 days against Clinton’s 11 videos on 9 days. What we end up with is a perfect storm. On top of the way the algorithm works in showing you more of what you’re interested in, we have Trump’s Facebook campaign also taking advantage of FB’s weighting by post type. Video works, Live video works even better, and Trump’s Facebook page has taken full advantage of this.

Finally, if we look at the sheer quantity of output in terms of Facebook posts made in October – there’s not a huge amount of difference: Trump has 327 vs Clinton’s 302. But what is remarkable is the dynamic way in which Trump’s page has varied how many posts it made on each day.

This sort of strategy is used by experienced news and viral publishers around the world. During a big, newsworthy event, be it Eurovision, a Royal wedding, or any particular incident in which public interest peaks, publishers in the know about the FB algorithm will increase the number of posts they make. This makes sense when you imagine that the total amount of engagement available to be claimed each day is variable. During periods of high interest, people are ‘glued to their seats’ or whatever the modern equivalent is. Thus the amount of total available engagement increases – people are using Facebook more, liking, commenting and sharing more.

Trump’s social team is clearly aware of this and you can see very clear peaks representing high posting frequency on 3 specific dates: the 7th, 12th and 22nd of October. Do these peaks of output correlate with higher total engagement on those days? You bet they do! 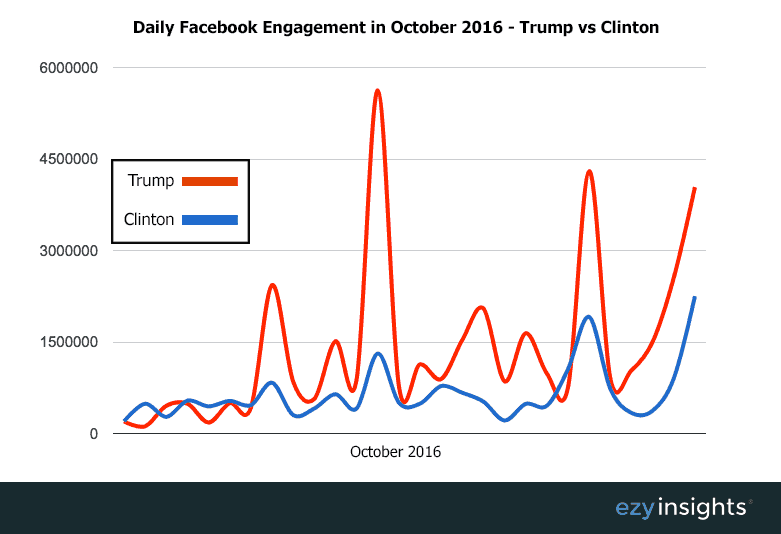 The very same peaks of high posting frequency are reflected in the daily engagement totals over October – the exact same dates, 7th, 12th, and 22nd. This is no coincidence. As Facebook has become a key delivery network for news organisations, viral sites, and celebrities, so too it has become a way of spreading political messages. Ironically, it’s Clinton’s page that is the more conservative one, with a steady no frills strategy that is more about issues and less about simple messages, while the older candidate Trump is posting in a more modern and dynamic way.

Without digging too deeply into the actual content of the posts made (now there’s a project), the most popular posts from each also tell a story about the strategies of both candidates. We can see that out of the non-video material, Trump has used photos which are very much in-tune with the way popular content is delivered on FB. Trump’s ‘Highlights’ include a photo of the Republican campaign office that was set on fire, along with the caption “Animals representing Hillary Clinton and Dems in North Carolina just firebombed our office in Orange County, North Carolina- because we are winning!” Another shows Abraham Lincoln and Hillary Clinton’s faces, with him labelled “Honest” and her labelled “Liar”. His most popular photo in the last month is this one: This image was, in fact, the most popular photo of either candidate over this period, something clearly not overlooked by the Clinton team who posted similar images twice more that also performed well. Interestingly, her most popular video was a live stream of Michelle Obama giving a speech.

It is fair to assume that Trump has personnel with a high level of expertise when it comes to taking advantage of Facebook engagement and reach. The campaign is behaving like a media entity rather than a Politician’s fan page.

If the 2016 Presidential election were to be decided on Facebook popularity, it would be a landslide victory for Trump.